All photos, images and video excluding advertising and google generated content, or unless otherwise labeled, are Copyright Jephyr (Jeff Curtis). All Rights Reserved.

Unauthorized or unlicensed use for all commercial and personal applications is prohibited.

I've been going through my hard-drives looking for images for an Art Marketing class I'm taking at MCC.

I rediscovered a photo I'd taken earlier this year at a nearby preserve east of Phoenix, Arizona.

I'd just rented the new Canon 100-400 L lens and was shooting critters and skies all over the park...and someone asked if I'd seen the Pelicans that had just flown in from California.

I have no idea if they knew what they were talking about as far as where they'd come from...but I wasted no time asking where they'd seen them...and then high-tailed it as quickly as I could to see if I could find them too.

Soon enough I found the beautiful creatures.  There were three of them and though they were at some distance away I happily began snapping dozens of pics.

I'll attach what I think is the best of the bunch below.

It was late afternoon...but the sun just happened to be catching one of the three as it had just brought its head up from feeding...and you can see a large drop of water coming off it's bill.  : )

You can click this image to see a larger view of it.

Thanks for stopping by...and see you soon!


Posted by Jephyr! at 4:45 AM No comments: Links to this post

Hi! I've been going through my hard-drives looking for images for an Art Marketing class I'm taking at MCC. I rediscovered a ph... 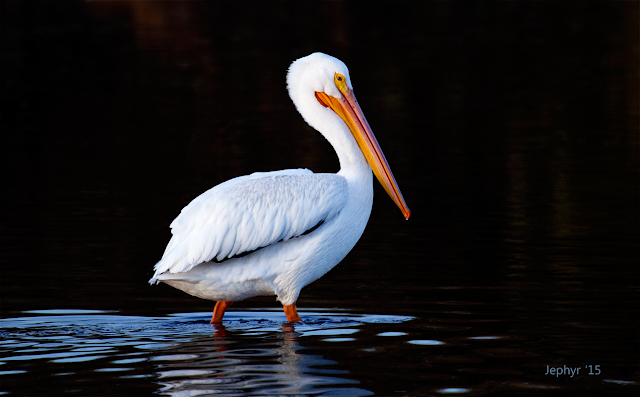